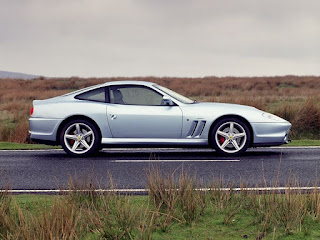 Mazda RX8
Many people say this car is a hairdresser’s car, I should know, I own one. Critics have said the RX8 styling is too fussy and the forums are rife with complaints about petrol and oil consumption. The fact of the matter is this, front engine, rear wheel drive, 230bhp and a very low price makes for an appealing formula. It is a very unique car; at its demise in 2011, the RX8 was the only production car built with a Wankel rotary engine, which revs to a heady 9,000rpm and delivers 0-60 in 6.2sec. While it is rather thirsty on fuel, I paid a pittance for mine and I have only had to top up my oil three times in 10 months.  It fits two suitcases in the boot, four people in the cabin and numerous horses under the bonnet. A job well done I’d say.

Aston Martin MKIII (DB Mark III)
In the novel ‘Goldfinger’ Ian Fleming referred to James Bond driving a MK III, however, when it came to making the film adaptation, the newer, better looking and more powerful DB5 was used. It is easy to feel sorry for the MK III, it was written into stardom, destined to become a hero, only to be replaced by its better looking younger brother. Arguably it did create an icon, it was the first Aston to feature the fantastic grille shape that has come to define the brand and besides it’s hardly a minger is it? As a result of its lack of fame, MK III’s can be picked up for considerably less than the extortionate DB5, despite production of around half the latter. The MK III deserves respect because it is the plucky, unassuming underdog, and supporting the underdog is what being British is about.

Audi A2
The A2 is horrendous to look at. That bulbous, hunchback brings to mind Quasimodo. While it may look like an ugly, lumbering mess, the A2 was actually a very advanced car in terms of the way it was manufactured. The hunchback, as I like to call it, was a pioneer as it was the first mass-volume car to use an all-aluminium body, an expensive construction process only previously used in the flagship A8. It was fantastically light, weighing in at well under 1,000kg and with very little drag over that rounded body it was extremely economical. However, due to the Susan Boyle looks and the hefty price tag sales were poor. The A2 sacrificed itself in the name of progress; Audi could have made it cheaply for mass sales, but chose to make a progressive car instead, which is rather noble.

Skoda Superb
In fairness, you can replace ‘Superb’ with any other car in the Skoda range; despite years of being nestled under the wing of the VW group, Skoda still struggles to shake off the air of cheapness. While this may have had some substance years ago, today if you can put brand snobbery aside the Superb and the rest of the range really start to make sense. Skoda is to VW what Danni Minogue is to Kylie; they both share the same DNA but one is that little bit cheaper. When you buy a Skoda you are essentially buying a more expensive car without the bragging rights of a premium badge.  The Superb is great because it means that the phrase ‘luxury Skoda’ is no longer an oxymoron. It is reliable, comfortable, safe and great to drive and can now be picked up for as little as £1400. You used to be stupid if you bought one, now you are stupid if you don’t.


Hyundai Coupe
If someone who had never seen a car before was shown a Hyundai Coupe and a Ferrari 456, you’d have a tough time of it explaining why the Italian offering was nearly ten times the price of the Korean car. Actually, you wouldn’t, I have been in a 456 and it is much, much better than a Hyundai Coupe. However, there’s no denying the coupe is a thing of beauty. For the money it’s very difficult to think of a car that is so well-proportioned. Cheap cars are normally presumed to forfeit good looks and personality but Hyundai have blessed the Coupe with truckloads of both. What it lacks in badge, the Hyundai makes up for by being the attainable alternative to the car that you really want.

Hummer H1
The Hummer brand has been tarnished somewhat by the uptake from Austrian musclemen and rappers alike. You get the impression that someone with a Hummer on their drive is overcompensating for what’s in their pants. Don’t forget though that the H1 is a hard-core vehicle of military origin and has some seriously impressive off-road capabilities. With 16 inches of ground clearance, approach and departure angles like nothing else on the road and a track wide enough to span a gorge, the H1 can tackle vertical slopes and formidable terrain with ease. This is an absurdly over the top car which unapologetically forfeits everything which could make it bearable on the road in order to cling on to its die-hard roots and be an off road animal. Large, brash and stupid but very talented.

Lexus IS-F
The IS-F was always up against tough competition, in a market sector where the BMW M3 rules the roost most of us with a brain cell or two would choose the German car. While this choice may be a valid one, there is no denying the Lexus is a lot of car. To the untrained eye this looks like a normal dull Lexus but underneath a five litre V8 firing its power at the back wheels means you are not in for a dull drive. The great thing about this car is that it’s so unassuming; it’s like knowing a dreary accountant only to find out he’s a football hooligan at the weekends. Totally unexpected. So, a handsome, powerful and remarkably well built car which will astonish people at the lights. What’s not to like?

Bentley Arnage T
As a sales exercise, the Arnage was never going to fill Bentley’s pockets quite as readily as the Continental. While it may depreciate hand over fist and be seen as outdated, the Arnage is without doubt a ‘proper’ Bentley. Nowadays, Bentley has the Mulsanne but the Arnage looks more clean-cut, more defined. To drive, a Continental is a more rounded car, but as a Bentley the Arnage knocks the Conti’s socks off. Encompassed in your own county of leather and wood, a 6.75 litre V8 provides 450bhp and 645lb ft of torque for hooligan antics with lashings of luxury. The old school charm of the Arnage lies in its excess; it is too big, too impractical and has too much power but you know you want one.

Ferrari 575 Maranello
The 575M was never the star of the Ferrari line up, this muscle car of sorts always took a back seat next to the super nimble coupes like the 360 and F430. Despite this, the 575M was no slouch; it could hit 60mph in 4.2 seconds and surge onto the dark side of 200mph. The best thing about the 575M though, is that it is utterly gorgeous. While the headlights haven’t aged well, the side profile is timeless; a long sweeping bonnet met by a stubby, abrupt rear is a recipe that always works. Pininfarina gave a helping hand with the design of the 575M and it shows. The low and sleek bodywork is complemented by tasteful round brake lights, simple side vents and wondrously wide hips. As a result, it looks slicker than a bullet and should be made more of a fuss of.

Gumpert Apollo
The Apollo is a ghastly car, there is no doubt about that. If you dismiss it because of its looks though, then you are missing the point entirely. This is a car that puts function over form; those messy looks are a result of time in the wind tunnel which Gumpert claim allows the Apollo to drive upside down. Although, they are yet to find a suitable tunnel and a suicidal driver to test this theory. You get the impression that the Apollo doesn’t care if you like its looks or would prefer more luxuries because it only really cares about hurling itself around a track as fast as possible. Remember, this ugly duckling has humiliated the big boys on many occasion, the Top Gear test track being one of them. No mean feat for a company with just 45 employees.

Italy: Flamboyant enough to make cars they can't use.

I recently wrote a piece arguing that a car should never be seen as a utility and that whoever you are you should have a car that excites and moves you rather than an old runabout. I stand by this viewpoint, however, I would like to point out an exception to the rule. There is one surprising place where I would recommend driving nothing except a scrapyard dodger. Italy. While this stunning country may have given us the likes of Ferrari, Lamborghini, Maserati and more recently Pagani, it turns out that the people of Italy have no concept of how to drive. You certainly could not reasonably expect to happily drive any of the above in the country they were conceived. I recently spent just a short amount of time in Rome, but it was long enough to experience the madness that is the Italian road system. Our driver turned up looking like a Mafia hit man in a smartly pressed suit and aviators, it turned out though that he was more like a getaway driver. The first rule of Italia

As the doors opened, the first day of the 2013 Geneva motor show was always going to be about one unveiling, the replacement for the Ferrari Enzo. For Ferrari a new flagship is more than just a new car, it’s a new benchmark to beat, an industry standard. Furthermore, all the technology and engineering in this car will trickle down through the range for years to come. This is arguably the most important car of the decade. The new car was kept well under wraps until the official launch, meaning anticipation at the unveiling was sky high. But my god it was worth the wait. Apart from a slight hiccup with the name; the phrase “I drive a Ferrari LaFerrari, doesn’t sound too cool”, the LaFerrari is cool from bumper to bumper. Borrowing the sweeping headlights and a couple of curves from the gorgeous 458 Italia, the ‘La’ looks crisp and modern. An aggressive front end defined by a monstrous vent angled into the bonnet is complemented by a beautifully low, sleek profile which flows to a s

A Plea for a New Direction

Humans are rubbish. We are inefficient, emotional and slow to adapt. If it wasn't for the opposable thumb we would have all been wiped out millennia ago, killed off by something with bigger teeth and more power. I watched a documentary last night where a spider had the ability to turn itself into a wheel and roll down sand dunes in order to get away from dangers. It would have developed this marvellous ability millions of years ago, while in relative terms man only invented the wheel last Tuesday. We think we are brilliant because we can get 80 mpg+ from the vehicles we use, but do you know how long an Albatross can glide for, without flapping its wings once, powered only by a couple of measly fish? Six days. They can fly for ten years without touching down on dry land! Now that’s efficiency! Most creatures in the animal kingdom can go for weeks or months on end without food and function perfectly well. Yet if we miss one of our three meals a day we go all light headed and wobbly